If you wondering what the Cap , then you should check Q8Cap Site to tell you better about it

Now I Believe that The current Hike in prices is an agreed on thing not only between ISP , but between ISP and The Ministry of Communication
Why you may ask ?

Because Back in 2007 , the MOC raised the price of Cable Usage for the ISP , 4 years ago , yet internet Subscription prices went down year after year
now The ISP raised the prices , and the reason most of them gave was the MOC prices

Also Another Thing that the Companies keep on saying
They say we can’t do anything to MOC , really we going that way ?
lets take one of the companies as an example

What names on the company as partners ?

Clearly the company isn’t run by unknown people , or immigrants
so when they say they can’t talk to the Minister they are just making up excuses

When the companies say they don’t have a voice , they are also thinking that we are dumb or forget
Back in August 1999 , AlRai newspaper ran a big campaign to expose the MOC as corrupt , because KEMS was getting favors Qualitynet and Fasttelco didn’t get back then

that campaign ended with the Under-Secretary back then , out of the ministry ! 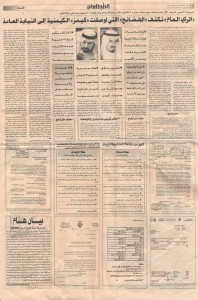 Now we have established two thing

Now you need to ask your self , why are they doing this now ?

The Right answer In my opinion is because its an agreement between them and MOC , they pressure US the USERS , we pressure the MOC , the MOC reduce the Prices ( set in 2007 ) and they all win

If you ask why they do that and not just get the MOC to reduce the price , You forgot Kuwait politics , The MOC want something to defend it self , because if they reduce the price because the companies asked , they will face a backlash from parliament members , but now they can claim it was the people that demanded it